The Church of St Mary Magdalene lies just inside the gates leading to the Grade 1 listed Madingley Hall which was dates from 1543.  At one time the Church would have been in the centre of the main village street, the remains of which can be traced in the landscape to the west of the building.  However, these houses were removed in the mid 18th century by Sir John Hynde Cotton as they encroached on his view from the Hall and, with the help of Capability Brown, the church was incorporated into the park so that it now appears to be part of the Madingley Hall Estate.  The fortunes of the Hall and Church have been closely intertwined over the centuries and are reflected in the number of family monuments erected in the Church.

Both in its setting, and the interior lay-out, the church is a place of peace and beauty. The building expresses a sense of calm stability and eternal values which rise above the changes and chances of churchmanship and secular concerns.  As the only place of worship in the village, it provides a vital focal point for residents and for those who live beyond, to come together and grow in the knowledge and love of God. So the members of the community are able to give expression to the most important aspects of their lives, support each other, and reach out to those in need beyond the parish boundaries. 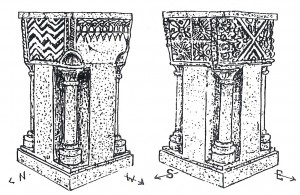 Research has traced the earliest recorded mention of a church in Madingley to 1092, so there has been a church on this site for nearly nine hundred years but most of the present building dates from the C13 – C14.  The church plan includes a west tower, nave with north aisle and north and south porches and chancel.  The North Aisle and arcade were added during the 14th century and the Nave clerestorey in the 15th.  The north aisle wall contains an aumbry and piscina.  Originally the East end of the North aisle was a Guild Chapel and later used as a private family pew in the 18th century for the Cottons who then owned Madingley Hall.   There is a fine arcade of pillars of arches in early Decorated style leading into the nave, which also features a beautiful 14th century arch at the western end.  The door leading into the South Porch, with its very beautiful contemporary iron hinges is probably late twelfth century.

Two Early English lancet and 14th widows survive together together with a reworked east window of three graduated lancets.   The spire and north porch were added in the fifteenth century.  Fragments of stained glass and damaged wooden cherubim are evidence of the damage ordered by William Dowsing  in 1643 “March 6, 1643. Maddenley [Madingley]. John Ivett and Theodore Wictham, church-wardens, Edward Dantry, Cunstable. There was 31 pictures superstitious, and Christ on the cross, and the two theves by him, and Christ and the Virgin Mary in another window, a Christ in the steple-window, order’d and the steps to be leveled, and 14 cherubims in wood to be taken down, which promised to be taken down.” 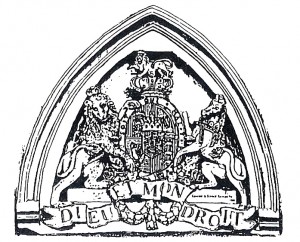 The Prince of Wales lived at Madingley Hall in 1863 and a Royal Coat of Arms was erected in the church to commemorate this.

Much restoration work was carried out in 1872-4 and 1885 and the chancel was rebuilt in 1874 at which time the roofs were renewed throughout and the floor relayed with tiles.

The churchyard has many large Yew trees and is laid to rough grass with surviving memorials dating from the C18 onwards.  Madingley is home to one of the country’s largest toad colonies and the churchyard provides habitat for them.

Memorials to members of the families who lived at the Hall have been erected in the church and churchyard.  Just inside the south door stands the war memorial, recording the names of sixteen Madingley men who lost their lives in the Great War 1914-1919. For so small a village this was a heavy toll: five of them came from one family.